Hunting music is a bridge for friendship

It’s amazing that you can open the sheet music and suddenly everyone is “speaking” the same language. And if they all are tuned to the same note, the language of music can speak to the audience. Music has the magical power to create friendships and unite peoples across borders. This is the main message of the EU Cup of the Hunting Horn Players. It is not about a fierce competition to become European champion, it is all about experiencing a beautiful encounter with hunting music performed by ensembles from different European countries. Creating a cordial space for cooperation and inspiration and thus preserving the distinctive European hunting traditions with respect for their diversity.

In 1990 an international competition of hunting horn players was held in Mariánské Lázně. The competition was attended by the great European hunting music player Mr. Reinhold Stief from Germany, who later invited the organizers of the competition Petr Šeplavý and Petr Vacek to the important event, where he received the cultural award of the German Hunting Association for his lifelong activity devoted to hunting and hunting music. On this occasion, they also spoke together for the first time about wider cooperation between horn players at European level.

Unfortunately, the serious illness of Reinhold Stief put an end to the developing friendship and cooperation. He sent a farewell letter to his friends in Bohemia, enclosing a torch with the wish that its beam would point us in the right direction in cooperation and spreading hunting music.

Time passed, but the idea of joint European cooperation never faded. Another historic meeting of horn players took place on 11 January 2008 in Třeboň, in the south of Bohemia. The Czech Club of Hunting Trumpeters invited representatives of clubs from Poland, Hungary, Slovakia and Austria to a working seminar. The aim of the meeting was to initiate closer cooperation between the individual trumpet organisations, exchange information and bring closer the horn traditions in Europe.

At the beginning of August 2011, representatives of friendly clubs from Slovakia, Poland, Austria and the Czech Republic met again in Chlum u Třeboně as part of the traditional summer course for horn players to discuss the coordination of important events, cooperation and especially the European competition. Due to the differences in the organisation, evaluation and organisation of competitions in each country, it was agreed that the rules for the European Cup of Hunting Horn Players would be made completely new and simple, so as not to hinder the participation of any country. In this spirit, the preparation was entrusted to the Club of Hunting Trumpeters of the CMMJ and especially to Petr Vacek, who is a recognized expert in the field of hunting music.

After an intensive debate and negotiations, already with LJV Thuringia and Saxony, the preparations led to the drafting of the Declaration, which was signed on 7 December 2014 on the occasion of an international concert in Prague’s Rudolfinum by representatives of horn players from Germany, Poland, Slovakia and the Czech Republic in the presence of observers from Austria (Lower Austria and Upper Austria).

After 25 years of preparation, the first European Cup of Hunting Horn Players took place in Mariánské Lázně from 30 September to 1 October 2016, symbolically directly at the place of the first idea of European cooperation. We are already looking forward to the next meeting of European hunting horn players.

The ice has melted in Prague

December 2014 showed us the onset of winter in a very unfortunate way. Almost the entire Czech Republic was covered in a blanket of ice and the freezing rain caused traffic difficulties on tracks and roads. Electricity failed in many places and it became apparent that we are defenceless against the vagaries of nature despite the most modern technology. Many travellers did not reach their destinations and normal life was paralysed.

This situation occurred three days before the arrival of foreign ensembles that were to perform in the Dvořák Hall of Prague’s Rudolfinum at the traditional concert Czech Hunting Christmas. Austria, Germany, Slovakia and Poland, i.e. the destinations from where the foreign horn players were heading, were also affected by a similar climatic situation. The organizers of the concert, especially when listening to the weather forecasts, were frightened by the idea that a year’s hard preparation with all the ensembles and trumpeters would come to nothing and that trumpeters and listeners from all over the Czech Republic and abroad would be stranded somewhere on the road. At such times you have no choice but to put the course of events in the hands of fate and trust that it will be merciful to you.

Fortunately, the forecast of bad weather did not come true. On Friday, trumpeters from Slovakia and Germany arrived in Prague and were greeted by the breaking sun and a slight warming. On Saturday the other ensembles arrived at the meeting place and the first general practice took place in Lety near Karlštejn Castle.

On Sunday, 7 December 2014, at 7.30 a.m., the convoy set off in the direction of Rudolfinum. The roads were passable and Prague was empty, so we were all at the scene before 8:30. The last practice starts at 9 o’clock. Everybody sits in their seats and the whole program, the accompanying words and the sound are being tuned.

At 10.30 the doors of the hall were opened and within half an hour the hall and the balconies were filled to bursting. At the stroke of 11 o’clock the first notes were heard and the audience was drawn into a swirl of hunting music from the five countries. The horns were replaced by borlase, the fujara was replaced by alpine horns, the Empora sang and cheered the rhythms, and Matěj Vacek introduced everything with youthful kindness. Then, when the Largo from Novosvětská by Antonín Dvořák, performed by the Prague Hunting Trio and timpani, rang through the hall, more than one tear falled from a hardened member of Hubert’s Guild. During the carols, regardless of nationality, not only all the trumpeters on stage sang, but the audience joined in as well, all speaking the same language that does not need an interpreter – the language of music. The reactions of the audience and the e-mails send confirm, that this concert Czech Hunting Christmas really opened the hearts not only of the listeners, but also of the performers and that we managed to fulfil the idea of the concert – Music, the key to friendship.

Signature of the Declaration

After the concert, which created the right atmosphere, the Vice-Chairman of the CMMJ Ing. Jiří Chmel welcomed representatives of foreign trumpeters and hunting associations in the Column Hall of the Rudolfinum. They gathered to have the trumpeters’ presidents sign a joint Declaration on the organisation of the European Cup of Hunting Horn Players. The Declaration was signed by Radek Šroler, President of the Club of Hunting Trumpeters of the CMMJ, Edmund Hatiar, President of the Club of Hunting Trumpeters of the Slovak Republic, Thomas Franke, President of the Thuringian trumpeters and Maciej Strawa from Poland. The signing of the document was attended by the presidents of the hunting associations from Thuringia and Saxony and representatives of hunters and trumpeters from Poland, Slovakia, Lower and Upper Austria. Among the distinguished guests, the Deputy Minister of Culture Mgr. Miroslav Rovenský, Chief Director of the Forestry Section of the Ministry of Agriculture Ing. Martin Žižka, Ph.D., Chairman of the SPZ Awareness Commission Róbert Komjáti-Nagy, Chairman of the Thuringian Hunting Association Steffen Liebig, Chairman of the Saxon Hunting Association Dr. Gert Dittrich and Vice-Chairman of the CMMJ Ing. Jiří Chmel. Rudolf Jandrasits and Rudolf Kern signed for the Austrian trumpeters. This document completed the first stage of cooperation with European countries. The idea was conceived more than 20 years ago and the negotiations took another 6 years. Here, too, the ice finally melted and European trumpeters started on the road to closer cooperation and a unified European competition. There are certainly many difficult tasks ahead on the way, but where there is a will, the work must be done. And the European trumpeters have declared their will to cooperate in the best possible way. By giving a concert together in extraordinary place and signing the Declaration. 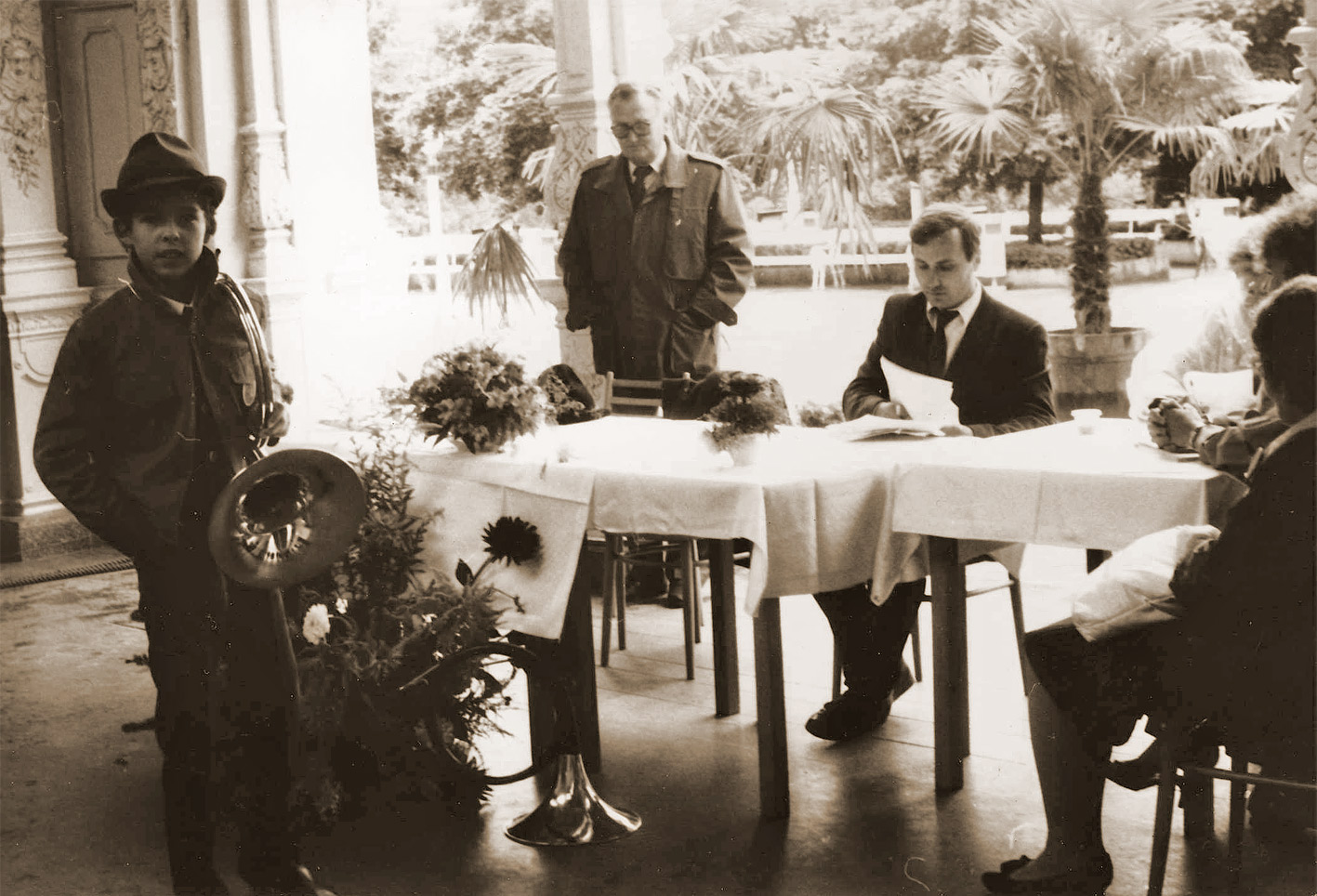 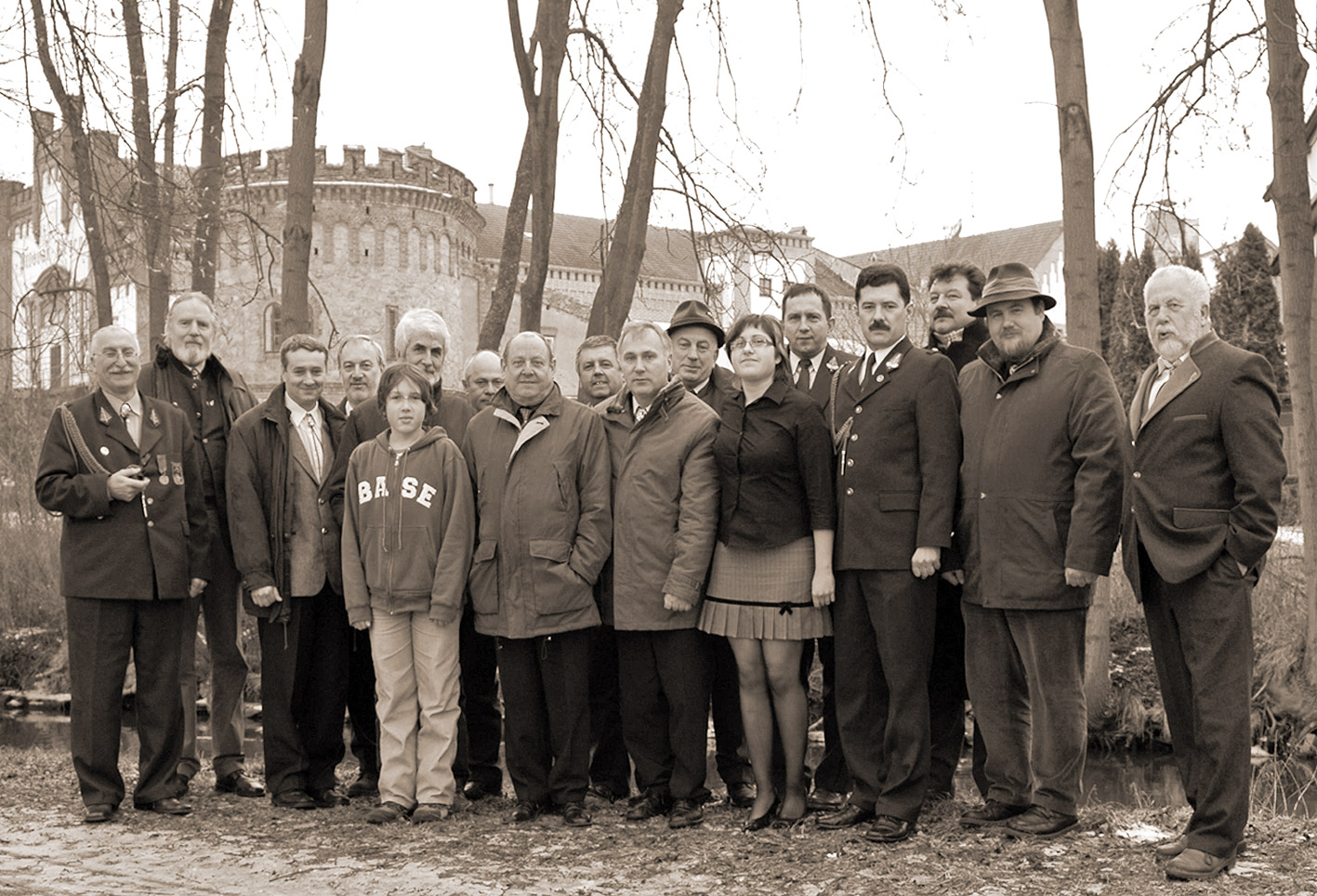 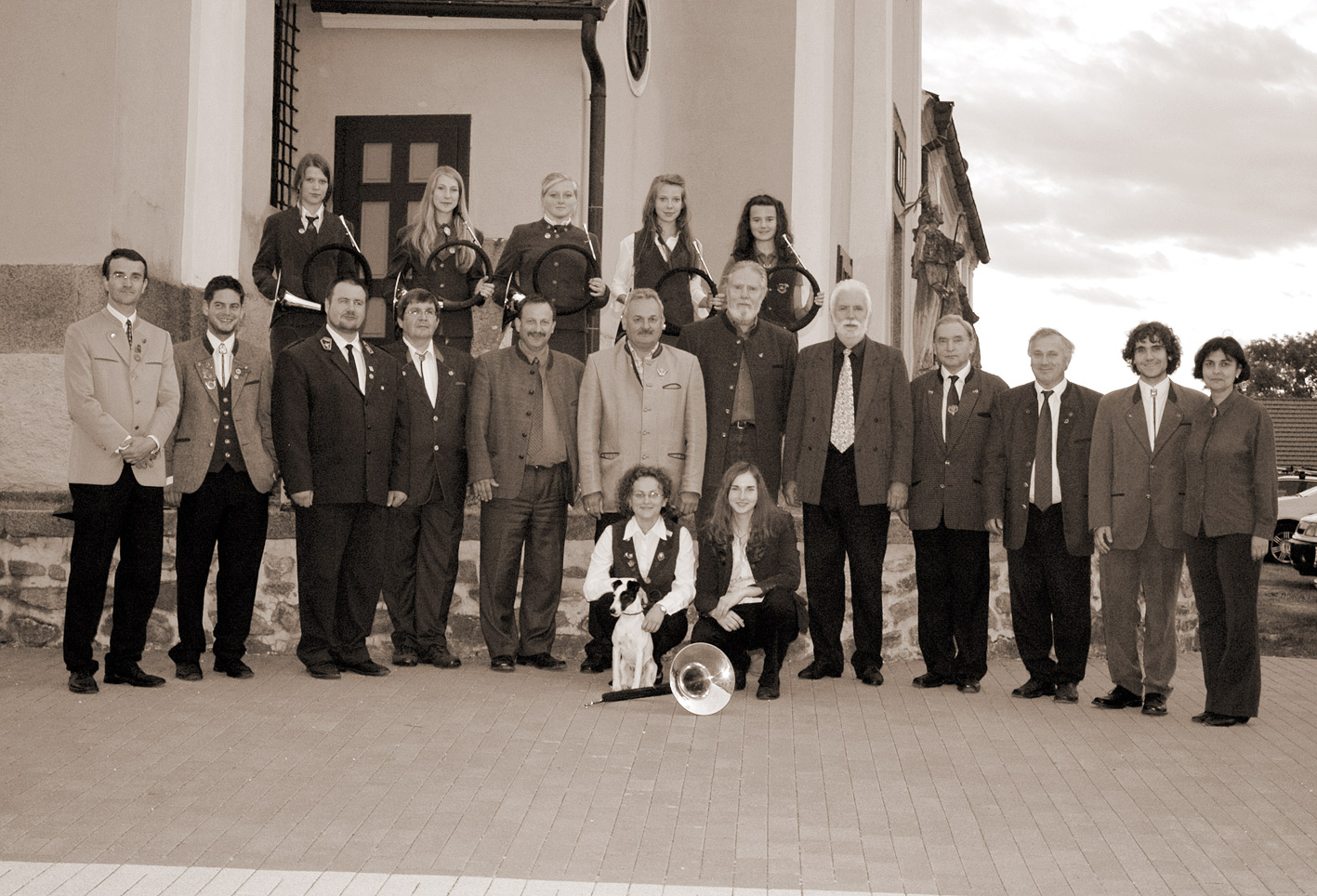 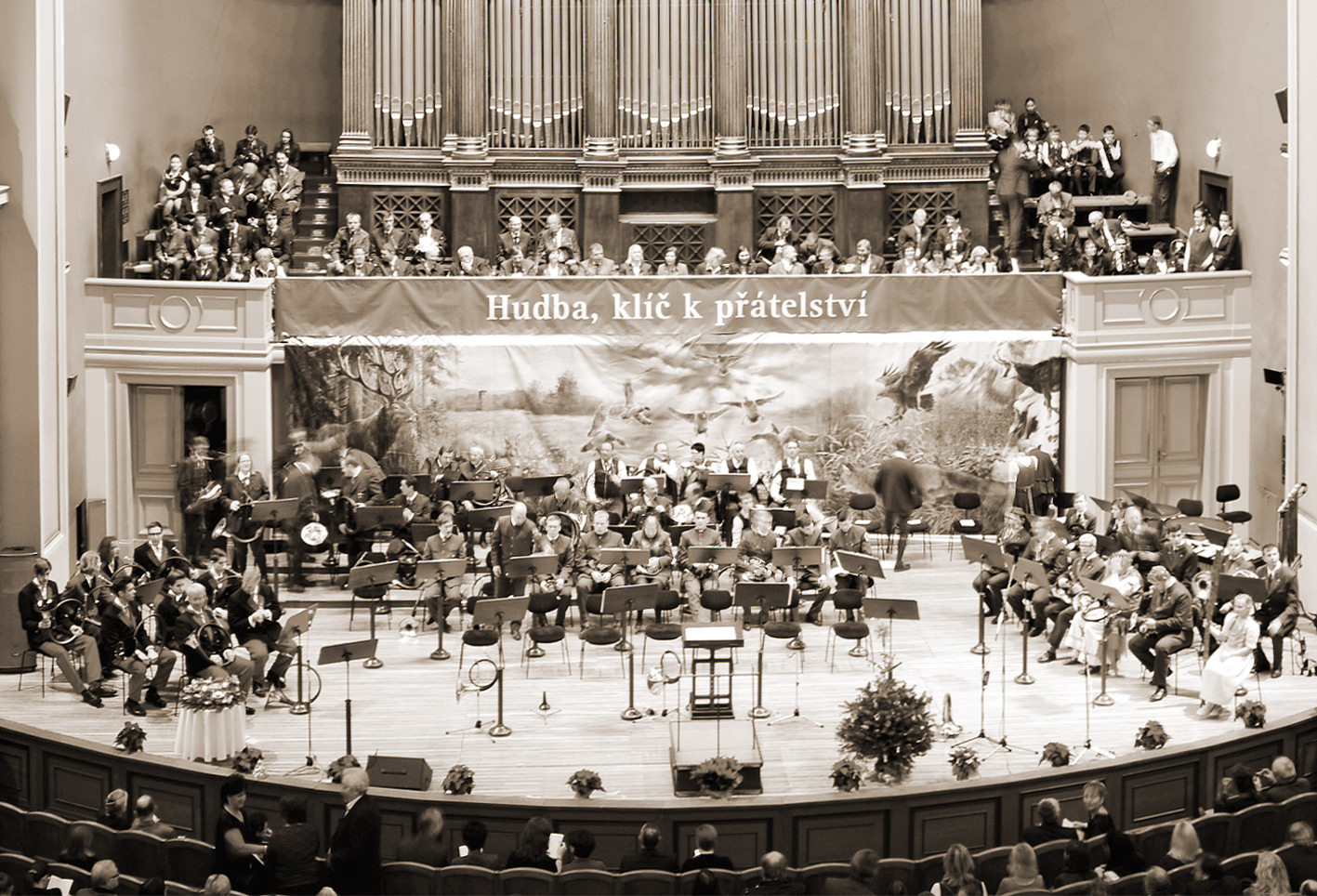 Manage consent
To provide the best experiences, we use technologies like cookies to store and/or access device information. Consenting to these technologies will allow us to process data such as browsing behavior or unique IDs on this site. Not consenting or withdrawing consent, may adversely affect certain features and functions.
Manage options Manage services Manage vendors Read more about these purposes
View preferences
{title} {title} {title}